The Second Battle of Bull Run was fought from 28th to 30th of August, 1862 at the same place where the first battle was fought in 1861 but it was on a much larger scale than the first one. Union General George B. McClellan was compelled to retreat from the fringes of Richmond by General Robert E. Lee. But, by that time, the Union Army of Virginia under the leadership of General John Pope had already taken shape and posed serious threat for Lee.

General Pope was handed over the dual responsibility of defending Washington and to operate northwest part of Richmond. McClellan’s army was operating from Richmond and in order to take some burden out of the McClellan’s army, Lincoln came to this decision.

John Pope was leading the Union army, whereas Robert E. Lee was in charge of the Confederates.

Confrontation and order of battle 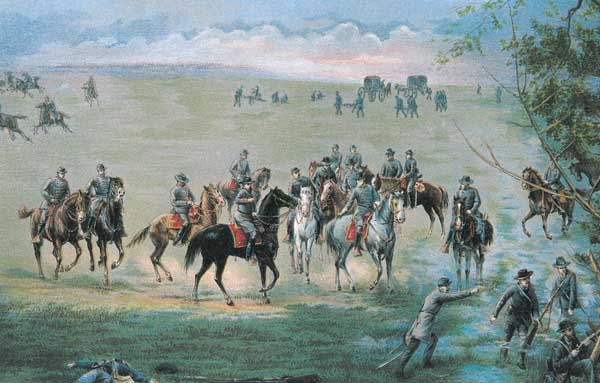 During the Seven Days Battles, the Peninsula Campaign was a major setback for the Union Major General George B. McClellan. President Abraham Lincoln asked John Pope take over the command of a newly formed army. Pope was successful in another war front, so seemed to be the immediate choice of President Lincoln. Jackson was trying to pull in the army of John Pope into the battle and for that he attacked a column of Federals that was crossing the Warrenton Turnpike, where his front was posted.

The fight that took place at the Brawner Farm was over within a matter of a few hours and the outcome of the combat was a tie. This made John Pope believe that he had entrapped Jackson, so he concentrated major part of his army around that area. A series of attacks were launched on 29th of August by Pope against the position of Jackson alongside the incomplete railroad grade. Counter attacks were made by Jackson and heavy casualties were there in both the troops.

Longstreet arrived by noon with his troops on the battlefield and he positioned himself on the right flank of Jackson. Pope was unaware of the fact that Longstreet had joined Jackson. However, he was busy in renewing his attacks. The Confederate artillery distraught the Union attacks under the leadership of Fitz John Porter. Just after this attack, 28,000 Longstreet’s men counterattacked on a large scale. It was a massive attack, of the war and it was enough to crush the left flank of the Union forces and drive them across a place called Bull Run. After the disaster of the First Manassas, the Union soldiers were effective in defending another debacle like that.

Even though the Union mounted a resolute defense, it was not enough to hold back the Confederates.