The construction of the Fort Donelson started in the year 1861 by Daniel S. Donelson and was named after him. Battle of Fort Donelson is a part of American Civil War. It took place in the year 1862 on February 11th to 16th in the Western Theater of the Civil War. Western Theater represents the area on the east of the river Mississippi and the area on the west of the Appalachian Mountains. This battle was fought between the Union Army (the normal land force of the United States) and the CSA (confederacy). The Fort Donelson was captured by the Union Army.

Union Army of strength about 25,000 was headed by Ulysses S. Grant and Andrew Hull Foote. Grant was the 18th president of the USA, whereas Foote was an American naval officer. On the other side CSA with about 17,000 men was under the control of John B. Floyd, Gideon J. Pillow and Simon B. Buckner. Where Floyd was the 31st governor of Virginia, Pillow was an American lawyer and politician, Simon was an American soldier who was one of the prisoners of the war. 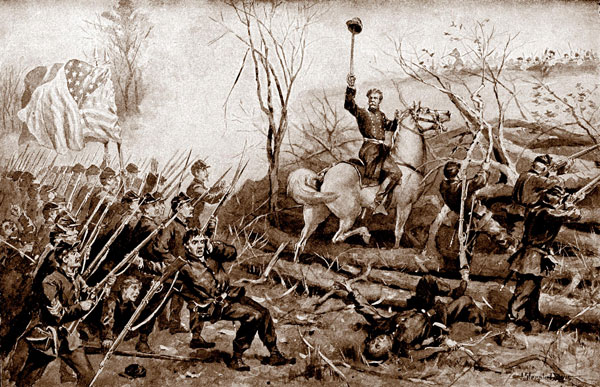 The battle at Fort Donelson took place soon after the battle at Fort Henry on February 6th in western middle Tennessee. The victory of the Union over the Confederacy at Fort Henry made about 2500 of the Confederacy soldier escape towards the Fort Donelson before the surrender. Grant and Foote opened the Tennessee River (largest tributary of Ohio River) for the future movements of the Union.

On February 11th, Grant held a meeting in which his plan to attack Donelson was supported by all of his generals. On February 12th, The USS Carondelet was the first gunboat to arrive up the river which fired many shells on the Fort in order to check the defenses. Grant established his headquarters on the left side of the Fort at the Widow Crisp’s house.

On February 13th, similar type of attacks were made to test the defenses, at night there was a snow storm which brought the temperature down to about -12 degree Celsius and the ground covered up to 8 cm by snow, all the guns and wagons were frozen. There were no possibility of burning campfire for cooking and warmth.

On February 14th, General Lew Wallace team and Foote’s flotilla arrived with another 10,000 Union reinforcements, six gunboats and twelve transport ships. Grant asked Foote to attack the river batteries of the Fort, obeying his orders Foote opened fire and in this process he was injured. In this attack many Union boats were destroyed, so Grant realized that they had to attack the Fort by land force without proper naval support.

On February 15th by launching a dawn assault by Pillow, Union was surprisingly attacked by the Confederates and was continued till night. Grant began to plan, to resume his assault in the morning.

On February 16th Bunker sent a note to Grant asking the terms of surrender and requesting an armistice. Bunker hoped that Grant would offer some unselfish terms as they were good friends. In the past when Grant was removed from the army post in California because of alcoholism, Bunker who was a U.S. Army officer gave him sufficient amount of money to return back to his home in lllinois. Grant showed no mercy towards them, as they were against the Federal government. This earned Grant a nickname – Unconditional Surrender.

At last the casualties at Fort Donelson all together including the dead, wounded and missing or captured were about 2,691 on the Union side and about 13,846 on the Confederate side.