Thomas J. Rowland is the author of George B. McClellan and Civil War History: In the Shadow of Grant and Sherman (Kent State University Press). His is the first-ever book-length review of McClellan literature. It corrects several historical assessments of McClellan while providing readers with important new ways of reading Civil War history generally. Rowland teaches university in Wisconsin.

In your new book, you have given readers powerful new tools for evaluating the quality of the histories they read: the concept of early war/late war, the fallacy of good general vs. bad general. Could you summarize these for us?

I think that much of what has consumed historical evaluation of northern military leadership in the Civil War is the dilemma of why the North did not win the war in summary fashion. I really think that many feel that there has to be an explanation for why success eluded the Northern cause in 1861-62.

Much lip service is paid by historians to the fact that the North, despite its obvious advantages of population, finance and industry, etc., faced a difficult challenge to restore the South to the Union. However, they seem to immediately rush into a critique of why early Union commanders failed to bring off the great victory that would accomplish this challenging goal. Instead of seeing that the grind of war led to an increased marshalling of military power in the North (with a corresponding dimunition of power in the South) that would bring about the restoration of the Union, they have focused almost exclusively on the “apparent” shortcomings of early commanders. This focus has assured the “good general” vs. “bad general” approach. In this scenario, early commanders, but McClellan in particular, pale in comparison to Grant and Sherman who endured the hardships of the early years to enjoy the fruits of victory in the final year. 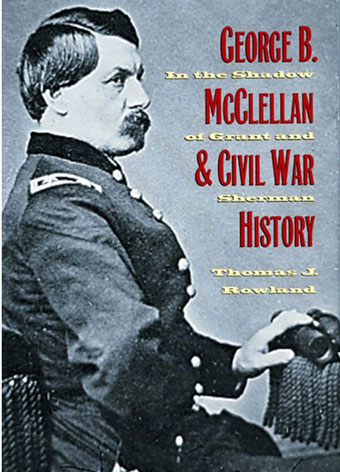 Any comparison of the McClellan of 1861-62 to the Grant and Sherman of 1864-65 needs to be contextualized in a number of significant ways before general assessments can be issued.

Your book wonderfully exposes the errors made by historians’ psychiatrically “diagnosing” McClellan. Are you opposed to psychohistory?

Like many historians, I am very interested in studying the personal characteristics of Civil War commanders and how their worldviews might have affected their judgment and careers.

That said, I would say that caution and fairness need to be employed in invoking psychological assessments of historical figures. The psychological discipline itself was in its infancy at the time of the Civil War. Consequently, there are real spatial and professional issues at stake. Before embarking into these murky waters, one has to have a very good understanding of the cultural and social context in which a person lived and what personal realities and pressures a person was experiencing.

Moreover, one has to be aware of what professional expertise a historian brings to rendering psychological verdicts. We live in an era when popular psychological terms are invoked in common parlance. Terms like “delusional” or “psychopathic” might serve us well in dismissing a person or idea in our own experience, but the terms are laden with a great deal of complexity and clinical nuance that suggest the need to be precise and professional.

There is, for example, a substantial difference between being delusional and having an overly valued idea/perception. Many of McClellan’s critics have chosen to assess him as delusional. I think a much more considered assessment would be that he placed too much value upon the idea that his Confederate opponents outnumbered him. Moreover, he was not the only one (in fact most commanders at one point or another greatly exaggerated enemy strength) to overestimate enemy troop strength.

In short, it does lie in the historian’s province to make personality assessments as they affected performance. It is quite another matter to issue precise and profound psychological verdicts upon historical figures. I view it as territory where even angels fear to tread.

What do you think were McClellan’s greatest strength and greatest failing?

I would have to agree with consensus opinion on McClellan’s greatest strength. That would have to be his superb organizational skills – virtues which should receive more than just the lip service paid to them by many Civil War historians. They generally mention these qualities in passing – almost as if to get them out of the way – before getting to their criticisms of McClellan. His ability to get thousands of raw recruits ready to fight as a disciplined army & his ability to instill that army with enthusiasm speak well of his leadership skills.

His greatest weakness would seem to be his inclination to personalize interactions to the point where it undermined the cooperation of those whose assistance and goodwill were necessary to maximize the fight against the enemy. This “over-personalizing,” however, did not carry the psychological baggage that some have maintained, and it should be pointed out, that the other parties in these interactions played significant roles in souring the communication avenues.

Does your book address scholars or a general readership?

Although some historiographical works are daunting if you are a complete novice to the field, I think that my work should appeal to both scholars and the general reader. The review of the literature should provide the general reader with sufficient context while the analysis of the literature should interest more seasoned scholars in the field. My chapter on McClellan and the psychological profiling issue is a case in point.

What kind of McClellan book would you like to see in the future?

I would like to see a McClellan biography that avoids the psychological profiling that recent ones have brought to the examination of his career. The psychological portfolio collected on McClellan, replete with speculation and “pseudofacts”, has made it impossible to assess his career in a balanced perspective. McClellan’s performance had serious shortcomings in my opinion, but his many accomplishments need better exposure.

How has your McClellan historiography affected the way you read history in general?

Well, it has made me quite humble. I realize just how much effort was expended to understand the historiography of one figure. It makes me aware of just how much study is required to make well informed judgements about issues and persons during the Civil War. It also made me aware of just how reliant I am upon the consensus thinking of most events in virtually all historical writing. That realization is both amusing and frightening at the same time.

Do you have a favorite current historian?

I haven’t given this much thought, I must admit. However, I think I admire James McPherson above all others. He has been the pillar of academic historians in the field since the halcyon days of T. Harry Williams and Bruce Catton. He writes well and his judgments seem balanced and fair. I do not always find myself agreeing with him, but he never fails to interest and challenge. His Battle Cry of Freedom is just about the best 1 volume study of the Civil War as you are likely to find.

A great number of enthusiasts publish in the CW field. Is this a boon or bane?

Generally speaking, I think that it is a boon. As long as enthusiasts are well read and understand the general picture (as well as their particular interests) they are likely to add to a greater understanding of the war. This reminds me of the discussion of whether you see the glass half-full or half- empty. Many academics in the field look down on the work of enthusiasts. I question some of these works, but I have learned some interesting facts and details along the way that I might not necessarily have come across otherwise.

Are there early-war figures who interest you as much as McClellan does?

I am interested in several early war commanders besides McClellan.

I am currently completing research for a Civil War biography of Irvin McDowell. Even though he left no personal papers, it is possible to patch together a lot of other manuscripts to provide an analysis of his career. He played a significant role in the first year of the war and fell victim to the fervor of Northern war fever in much the same way as McClellan, his successor, did.

Don Carlos Buell interests me as well. I understand that a biography of Buell is soon to be published.

Are there fads in CW history? Is there a current fad or trend?

I suppose so. But this does not mean that long-neglected lines of inquiry are fads per se.

One trend in the literature is that of examining the lives, belief-systems & general experiences (social history) of the common soldier during the war. This is a worthwhile endeavor and some fascinating writing has been coming out over the last decade.

Another trend is that of gender-related studies. Some of these have been interesting; however I remain suspect of a few conclusions reached in some of these studies as contrived and far-fetched.

What do you think of novels, film, and television as media for teaching history?

I have not had much experience in using novels as part of my classroom methodology, but I am a strong believer in using video, particularly in my survey courses.. Many of my colleagues do not endorse their use. I think that my experience of teaching on the secondary level convinced me that you need to engage students visually as a means of maintaining their concentration levels. Moreover, the quality of video presentations is so different, so much better, than those of 15-20 years ago.

For many survey topics, I would be arrogant to say that I could present a lecture that would provide a better learning experience than the videos I select for class. All videos are supplemented by a study guide of questions I have devised & form the basis of discussion at the conclusion of the video. My review of Civil War video suggests limitations in the consensus approach that is frequently adopted by video producers. Hence, a discussion following the video provides me with the opportunity of suggesting different interpretations.

What lines of interest in the Civil War field seem to engage your students?

Military and social questions seem to be the most popular. When it comes to written assignments, these two topics tend to dominate all other considerations.

The key battles of the Civil War continue to attract a great deal of attention. There is also a corresponding interest in evaluating the decisions of the great commanders of the war. In the social field, students seem very interested in the social dimensions of northern and southern societies during the ante bellum period.

The old “irrepressible conflict” theory seems heavily endorsed by many of my students.

What do you read for fun, apart from CW works?

I generally read non-fiction works. General history and biography hold much fascination for me. Other than that, I will occasionally read murder/crime mysteries and am in the process of re-reading many of the classics. For example, I have just finished reading Melville’s Moby Dick. Next on my list is Joseph Conrad’s, Heart of Darkness (not sure how much fun this will be).

Thanks, Tom Rowland. May your McDowell book prove as interesting and valuable as George B. McClellan and Civil War History.