Siege of Corinth was fought between 29th April and 30th May, 1862. This engagement of the American Civil War is also known as the First Battle of Corinth. Corinth was a strategic point because it was the intersection of two important rail lines. One was the Memphis and Charleston Railroad and the other one was the Mobile and Ohio Railroad. The siege came to an end when the Confederates retreated. After that Union took charge of the position, so that they could confiscate control over the Mississippi River valley. The Union forces even targeted Vicksburg, which was the stronghold of the Confederates.

Leaders involved in the Siege of Corinth

Major General Henry Halleck was leading the troops on behalf of the Union and P.G.T. Beauregard was in charge of the Confederate troops.

Just after the Union won the Battle of Shiloh, Major General Henry Halleck combined three Union troops. The three armies were the Army of Ohio, Army of the Mississippi and the Army of Tennessee. These three armies were amassed for advancing on the crucial rail center that was under the Confederates at that point of time. The critical rail center that was the center of attraction was that of Corinth. Now all these were happening just after the Battle of Shiloh where Major General Henry Halleck had to suffer staggering losses. Therefore, Halleck started a dreary operation of aggressive, invigorating entrenchment after making an advance. 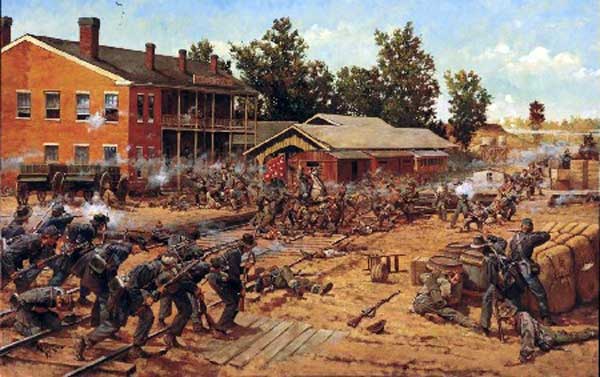 The Union armies had moved 5 miles in almost three weeks and on the 25th of May, they were in a position to lay cordon to the town. The morale of the Confederates was already on the lower side and even the Union forces outnumbered the Confederates. To make things even worse, the water that was there was contaminated. Due to this, thousands of Beauregard’s men had fallen prey to Dysentery and Typhoid. The Confederates were reduced to a handful of men who couldn’t just hold on to the railroad crossover.

Going by the numbers, you will notice that the Confederates lost as many army men due to the sickness as they had in the Battle of Shiloh. Everything was going against the Confederates and this made them retreat from their position of Corinth.

Amongst all the Wing Commanders of Halleck, John Pope was most active all through the campaign. In the Siege of Corinth, John Pope’s troop moved forward first and annexed the Farmington town that was a few miles from the town of Corinth.