The American Civil War commonly known as the War Between the States is a historic event that took place in America. It started off in 1861 and continued for four consecutive years before coming to an end in 1865.The main objective of the war was to resolve the issue of slavery and to keep the states united as one nation. 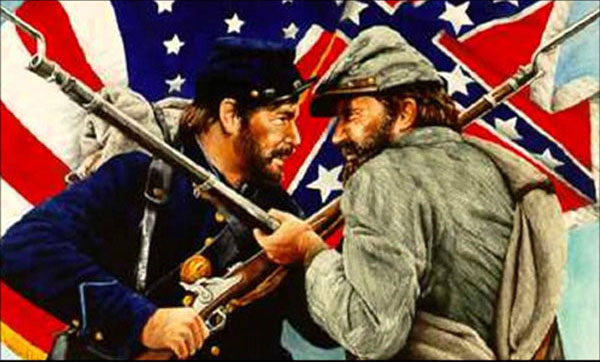 The American civil war had several reasons behind it such as the decades long frustration regarding the Doctrine of state’s rights, tariff and trade issues, but the main reason was “slavery”.

So in January 1861 they seceded from the United State Alliance and under the provisional Presidency of Jefferson Davis, formed a Group called The Confederate states of America. This group consisted of states like Florida, Mississippi, Alabama, Georgia, Louisiana, and Texas, and also had a military base of their own.

During the period of 1861 to 1865 a number of bloody battles were fought between the federate and the confederate troops at several places throughout the country which resulted in simultaneous consecutive victories of both the troops while some remained undecided.

On January 31st 1865, the 13th Amendment to abolish slavery was passed by the congress to the United States Constitution. Then a peace conference was held by the dignitaries of both the groups which proved to be useless.

After the victory of the union at fort Blakely Alabama, the confederate army general Robert E. Lee surrendered his army to the then union army General Ulysses S. Grant.

During this the American President Lincoln was shot in the head at a theatre.

In May 1865 the last battle of the civil war was fought at Palmito Ranch which concluded with the victory of the union.

Thus the civil war came to an end 20 days after the death of President Lincoln with all the confederate troops surrendering. After this, the then American vice president, Andrew Johnson, took over the presidency and the process of rebuilding the nation’s image, trust and harmony began.