Here’s the letter written by Lieutenant John Burnham to his family after the Battle of Antietam on October 4, 1862. He belonged to the 16th Connecticut Volunteer Infantry. 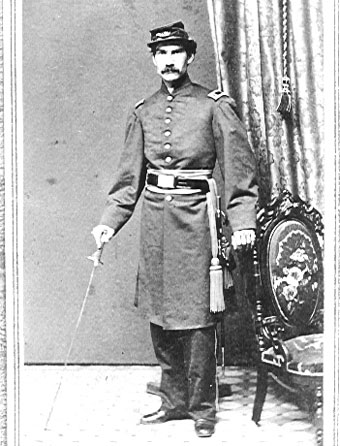 My Dear Mother and Family,

I received a short note from Lottie enclosing extracts from newspapers about the fight of the 17th or the “Battle of Antietam.” One thing is certain, it was a “big fight,” as the sixteenth found to their severe cost, and although we got the best of it, on the whole I am unable to key myself up to a very high pitch of exultation over the day’s work. We had the best of the fight because we had advanced our position during the day, but it was at heavy cost and the ground gained was contested inch by inch.

There has been no fighting since, and if our army was not pretty badly handled and about used up, I can imagine no earthly reason why we did not go at them the next day with a vengeance. We lay on our arms all day, the day after the battle, and all night the next night, expecting momentarily to be ordered forward, but we were not.

On Friday, we went on the field and gathered the dead and wounded. The rebels held the field in which the 16th were cut up so badly, and we had to leave the dead and wounded on that account over the whole of Thursday. They were there about forty-eight hours, but most of them, the wounded, said the rebs treated them kindly and gave them water. It was very hot weather but fortunately there was a heavy rain on Thursday night and they managed to catch a canteen or two full of water by holding up the corners of their rubber blankets. One of our men, who was unable to get off the field, managed to pull off one of his boots and caught water in that and drank it.

I was on the field from noon until eleven o’clock at night of Friday, giving my personal supervision to the collection of the dead and wounded. You may be assured it was a trying position.

The position we occupy now is a pleasant one and I would like it if we could remain in it. Thus far, since we have been out, we have seen little but the “circumstance of glorious war,” as someone has aptly said. Yesterday we saw a little of the “pomp” for the first time. The army was received by President Lincoln and Gen’l McClellan, and of course we did our share. Our division happened to be the first one reviewed in Gen’l Burnside’s corps. As soon as the ceremony was over, the division and brigade commanders were ordered to dismiss their commands and join the President’s escort.

If we had been in command of the regiment, we should have trotted back to camp, but I was lucky once again and as we stood for the time being in a Brig. Gen’l and Adj. Gen’l’s shoes, respectively, we had the honor of tagging old “Abe” around on his reviewing tour for a couple of hours and taking a look at between fifteen and twenty thousand men. I had seen “Abe” before but I thought him half so homely. He ought to be wise and good and honest.

Lottie wished me to write what were my personal feelings in the fight. You have all heard a great deal about men going into battle and, after the fighting had commenced, forgetting all about what they were doing. This may be the case to some extent, but in my opinion nothing like what is represented. I had no time to think of danger. I am frank to confess that although I had no idea of running away I trembled.

In relation to the condition of the rebels, I can answer that unequivocally I saw as many as five hundred prisoners I should think in one day and I never saw anything like it. Their hair was long and uncombed and their faces were thin and cadaverous as though they had been starved to death. It is of course possible that it is the natural look of the race, but it appeared mightily to me like the result of short fare. They were the dirtiest set I ever beheld. A regiment of New England paupers could not equal them for the filth, lice and rags.

I hope as I always have, that I may have the courage to do my duty well, not recklessly but with simple bravery and fidelity, so that if I fall you may have the consolation of knowing that I not only lose my life in a good cause but die like a man. One thing I wish to say particularly–this romance about men being shot in the back is all a humbug. A mounted officer is as likely to be hit in the back, and more likely to be hit in the side, than in the front, and don’t ever do an officer the injustice to think ill of him for such a wound…

Bless you all. Yours affectionately,