Here is the letter from Corporal Frederick Pettit addressed to his family after partaking in the Battle of South Mountain on September 20, 1862. He belonged to Company C, 100th Pennsylvania Volunteer Infantry. 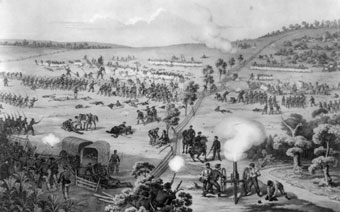 Having a little spare time this morning, I will commence to give you a short account of what our regiment has done since I came to it.

I overtook it about twenty miles from Washington at Brookeville, Md. It was dark when I found them. They had been resting a day to get provisions. The next morning, we started out a little before dark. Our rations are crackers, coffee, sugar, and beef when the cooks have time to boil it.

The next day, we started on our march again and passed through New Market, where the rebel pickets had been the night before. This town is eight miles from Frederick. After passing about two miles from the town, we halted and the cavalry and artillery were sent forward to reconnoiter. After waiting about four hours, we again moved forward. About three miles from Frederick, we again halted.

The front skirmishers loaded their guns and advanced cautiously. The artillerymen ran two guns to the top of a hill on the right. But the rebels had gone. A shot or two at their rear sent them flying. We marched about a mile further and encamped two miles from the city. The next day we could plainly see the cannonading. We could not see any effects of it except a dead horse or two and houses turned into hospitals. After going some distance further, we encamped and lay down and slept during the remainder of the night.

The next morning we started early toward Middletown. It was not long before we heard cannonading in front. About a mile from Middletown, we found a large barn and bridge burned. But the stream was shallow, and we had no difficulty in crossing. After going a short distance further, we could see the batteries at work and hear the whizzing of the shells. The rebels occupied a wooded pass in the mountains. The turnpike runs through the middle of the pass. On the right of it, the rebels had a battery in a ploughed field and others on the left in the woods.

When we came in sight of the enemy, our division halted and our regiment was sent forward as skirmishers. We advanced along the turnpike in plain view of their batteries on the right until we came within a half mile of it. We halted and protected ourselves as well as we could under the bank at the side of the road. The enemy sent their shell amongst us thick and fast. They exploded above and all around us. Shortly an orderly came and told us to fall back. When we commenced to move, the shot and shell flew faster than ever. Our loss this time was only one man wounded, but if we had stayed fifteen minutes longer we would have been cut to pieces…

We advanced up the hill steadily under a shower of shot until we came near the top of the hill, where the road ran between two high banks. Just had we halted when a number of cavalrymen and artilleries came rushing down upon us crying, “Clear the road for the cannon, we are beaten.” Then the artillery came galloping down with the guns and caissons. And to make things worse, the rebels were sending grape shot and shell amongst us in a perfect shower.

We clambered out of the road as fast as we could, and our officers soon formed us in line of battle on the right of the road. We were ordered to fix bayonets and expected to make a charge, but after we started down the hill again and marched on up the valley about a mile, we halted, about faced, and started back across the hill. While coming up the valley, a number of men gave out; amongst them Lieutenant Morton. We saw him no more that day. We soon met General Wilcox and, as we were almost exhausted, he ordered us to lie down and rest.

After resting about three hours, we formed in line of battle. The rebels had advanced upon our cannon and we must drive them back. The 45th Reg. Pa. and 17th Michigan went in before us and drove them behind a stone wall. We then advanced to the top of the hill through a shower of musket balls. When we came to the edge of the woods, we halted and commenced firing. We were about as far from them as from our corn crib to the barn. They were in a lane behind a stone fence and we were in the edge of a woods with a clear lot between us. I fired eleven shots. Most of the boys fired fifteen before the rebels ran. The lane was piled full of killed and wounded rebels…

I have a chance to send this now. We are all well and near the Potomac River. We move soon. I send you a rebel envelope I picked up on the battlefield.