Here’s a letter from Captain Henry Pearson of Company C, 6th New Hampshire Volunteer Infantry. It was written after the Battle of Second Bull Run on September 5, 1862. It may be noted that Captain Pearson was killed in action on May 26, 1864. 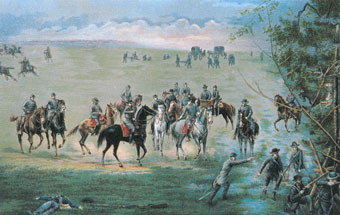 Friend: Perhaps you would like to know our experience in the late great battles near Manassas. As my account will probably differ from any which you have seen in the newspapers, I will endeavor to speak only of what I saw.

(August) 28th we slept at Blackburn’s Ford. Jackson was supposed to be at Centreville. Friday (the 29th) we marched up to Centreville and finding no enemy there followed down the Warrenton turnpike to Stone Bridge. Some skirmishing occurred near the bridge, but the enemy falling back, we advanced up the turnpike to the old battle ground. Some of the hills where the old battle was fought have been cleared of their woods, and the open country now lies nearly in the shape of a square bounded on three sides, north, west and south by woods.

About two o’clock Friday, (Major General) Heintzelman attacked the enemy in the belt of the woods on the north side of the square. After half an hour’s sharp fighting, the rebels were driven from it back into the woods on the west side. Here they made another stand. Kearney’s Division and Hooker’s Division were repulsed with great slaughter in succession and driven entirely from this part of the field, leaving nearly half their numbers killed or wounded in the hands of the enemy.

It would seem that after the slaughter of two such divisions as Hooker’s and Kearney’s, General Pope would have sent a larger force into these woods.

Instead of this, however, he ordered up our Brigade, the first of Reno’s Division, and ordered us to clear the woods in front of us. We deployed and advanced in line, the 6th New Hampshire on our left. We had not entered the woods more than three or four rods before the muskets began to pop ahead of us and a few bullets to whistle by us. Soon we could see plenty of snuff-colored pants ahead of us not more than seventy-five yards, and the cracking of rifles became general.

We delivered a volley and advanced, loading and firing. The storm of bullets soon became terrible. The rebels fought us every inch of the way. We charged upon them in a sunken road which ran through the woods parallel to our lines and drove them from it. As they were skedaddling from the ditch road, our boys poured in a volley which literally strewed the ground with them. When we had advanced some fifty paces, we could see through the woods into the open fields beyond. The rebel artillery began to play upon our flank, which did us very little damage, however, as the trees were so thick.

Discovering that our regiment was alone and (that) the bullets began to come thick and fast from the rear, the Colonel sent me back to see why the other two regiments did not follow us and to tell them they were firing upon us. Peeping up over the bank, I could hardly trust my eyes when I saw yellow legs standing as thick as wheat not more than twenty-five paces from the ditch. I instantly called to the regiment to retreat to the ditch, which was done at a run. Taking a second look to see if I could spot a flag, I saw one, their battle flag, with a red cross worked in it and a swarm of rebels following it at double quick towards our left, as we were now faced, so as to surround us.

As it was evident that we would soon be surrounded and overwhelmed with numbers, and be all killed or captured, the Col. wisely ordered a retreat up the road which led around into the wood from which Heintzelman had driven the enemy at the beginning of the battle. After fighting until sundown with little better success than we had, the enemy held the field that night.

Saturday, August 30th, for about an hour there was a perfect din of musketry in the woods. A large rebel battery on our left raked our troops with terrible effect, and soon our extreme left and then all the rest of our line gave way and came out of the woods in the greatest disorder, pursued by the enemy, who were yelling in their peculiar effeminate manner.

From the time they began to advance until sundown, they never halted but swept everything before them like a hurricane. At sundown, they had swept away round to our rear and were within a short distance from the turnpike–our only line of retreat. Here they had met the veteran force of Sigel and Reno, who held them at bay until darkness put an end to the contest. Towards midnight, we forded the stream and, our minds depressed with sorrow, bade a final adieu to the ill-fated fields of Bull Run.

General Pope is a most unblushing liar. In his official dispatch, he calls the result of the contest a victory when every man in the army knows that we were defeated at all points both Friday and Saturday and that too because at all points we were out-generaled. Had the great battle been fought Friday, we might have won, because the rebels received large reinforcements that night.

The battle was a great blunder. The defeat was as complete as that of the old Bull Run. The difference was that in this battle when a regiment was defeated it was not panic stricken, but rallied on its colors the moment it got behind the reserves. A rebel prisoner with whom I conversed told the truth when he said, “Boys, you can fight as well as we can, but Old Jackson is always one day ahead of you.”

The Northern people get not the faintest idea from the newspapers of the true state of affairs at the seat of operations. The lying reports of our general and reporters beat anything that ever existed among the rebels. The whole army is disgusted. Are we disposed not to recognize impossibilities? We can do now voluntarily what we shall certainly be compelled to do when thousands of more lives have been sacrificed. You need not be surprised if success falls to the rebels with astonishing rapidity. They certainly have the force, the skill and genius to do it…