Jim Ridgway is the author of Little Mac: Demise of an American Hero, a revision of the Radical Republican view of McClellan that dominates today’s histories.

You have written a biography that is very favorable to McClellan. We live in a very anti-McClellan world. Is the world wrong?

History-wise the world is often wrong. As they say, it’s the winners who write history. In the American Civil War, the radical Republicans – Mac’s arch enemies – were the grand winners. So it should come as no surprise that McClellan is badly perceived today.

You believe that the war could have been won in 1862. What is your answer to those who say the fall of Richmond would not have ended the war? 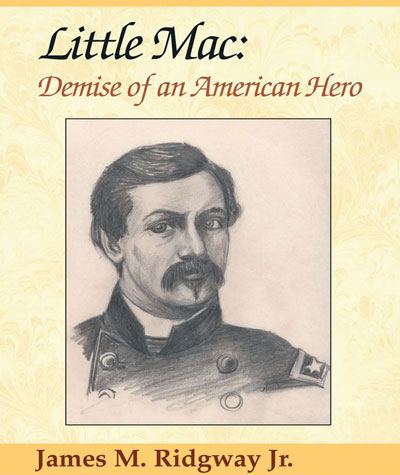 The Confederacy was hardly more than a rickety string of dominoes mainly supported by the limited industry of Virginia, which at the time meant the Richmond-Petersburg complex. Once the Confederacy lost its biggest city, New Orleans to Federal control (and it fell without much of a fuss), it was hung together by tenuous threads to Richmond. But whereas it was only a matter of days after the fall of Richmond in 1865 that the war ended, it probably would have required at least another six months for the North to finish off Southern resistance had McClellan been allowed to take that linchpin of the Confederacy in the early summer of 1862. So they are partly right.

The fall of Richmond would not have brought an instantaneous end to the fighting, but, still, it would have insured a relatively quick end of the Confederacy and thus a huge improvement in lives saved for both sides, with the war most likely ending sometime around December of 1862.

What was the relationship between Lincoln and McClellan?

One might think of Lincoln and McClellan as the original odd couple. At least on the surface, no two men could have been more different.

Certainly, these extremely ambitious men irritated one another to no end. Lincoln was put out by what he saw as McClellan’s elitist, eastern establishment ways, and McClellan often times found Lincoln’s somewhat crude demeanor difficult to suffer. Yet, there were certain profound aspects within these men that drew them together. Both held an enormous intellectual curiosity for the wider world about them – science, history in general and great men of their day and of the past. And both, while they cared deeply for the welfare of their fellow man, including back men (though, as was prevalent in their day, each saw Negroes as something less than Whites), were quite willing to send men to their death in pursuit of political abstractions concerning how men should best be governed.

Indeed, though widely separated by political affiliation and social background, on some mystical level I believe that they held a deep affinity and respect for one another.

How would you compare Mac and Lee?

From my perspective, the only thing that separated these two fine American military commanders was age and circumstance. I believe that Lee sometimes viewed McClellan as a younger version of himself – cultured, capable and aggressive. What separated their specific styles of aggressiveness was the fact that each was acting from very different sets of circumstances.

As a realist, Lee understood that the South had little, if any, chance of winning a head to head war with the North. The North’s manpower and industrial advantage was just too great to overcome. Thus he concluded early on that only by the most daring, perhaps even reckless, risk-taking could Confederate arms hope to compete with the Federal military machine. Knowing this gave Lee the advantage of never having to pull his punches, at least during those times when the South still had the wherewithal to throw a punch. In other words, anytime it was possible, he could go for broke without having to second-guess himself – his ordering of Pickett’s desperate charge on the third day at the Battle of Gettysburg comes to mind as an example.

On the other hand, McClellan knew the South could not reasonably win the war; but he also knew that by some fluke of Federal impetuosity, it was still remotely possible for the North to lose it (as almost happened when his troops were ordered to be transferred to Pope). Thus, unlike Lee, McClellan had to act boldly but not rashly. Some of us believe that McClellan, moving against Lee and the Confederacy with a balance of speed and certainty as was his desire – had he been given the proper resources (full use of the North’s huge advantage in manpower and industry) and remained in the post of general-in-chief – possessed the ability to end the war by December of 1862 as previously mentioned.

Compared to Lee, who fought to the end of the war making the best of what the Confederacy had to give him, McClellan is an unfinished book. Indeed, with McClellan being strategically handcuffed and then finally forced out by the Lincoln administration for political reasons, we will never know just how the two of them would compare in total. Or at least we can’t prove it. All I can say is that if they had switched places, I personally believe that each would have fought in about the same manner as the other in similar circumstances, i.e., one receiving the full backing of Jefferson Davis, the other hogtied by Lincoln and Stanton.

What do you think of Burnside and Franklin?

Well Burnside is an open book. One can easily see Burnside as McClellan, Burnside himself, and others who knew him well saw him: a very likable guy possessing limited ability. As for Franklin, I honestly know very little about him. My overall impression of him is that he was at times a quite capable supporter of McClellan, but that somehow their relationship cooled. That’s about it.

What was McClellan’s greatest asset?

Quite simply his above average intelligence. Of course this often worked against him. For when you combine his native intelligence with his intellectual curiosity and a first rate classical and technical education, it’s easy to see where he would have a better grasp of things in general than most of his associates. And certainly this made dealing with his sometimes dull superiors, who saw his superior abilities as a threat to their position, a nightmare.

What is the most outrageous charge against him made by historians today?

That he was not aggressive. McClellan was constantly pleading with Lincoln, Stanton and Halleck to let him pursue bold ideas and strategies. They, however, consistently fought to water down his plans to the point of making them ineffective, only to then turn around and blame him for less than glowing results.

A classic example of this is when Mac wanted to make a dash for Petersburg from his secure base at Harrison’s Landing. This scared the pants off Halleck and the timid administration. Going for the choke point of Petersburg was a great way to get at Richmond. And of course Grant was permitted to take this step in 1864. As we know, instead of allowing Mac to seriously threaten Richmond through the then quite vulnerable backdoor of Petersburg, the administration ordered his army recalled to Pope. This gave Lee a free shot at Pope (not having to worry about the safety of Richmond), while the Army of the Potomac was squandering its hard won position by means of a time consuming retrograde movement to Pope. Lee knew only too well that he could get to Pope faster that the Army of the Potomac could load and unload itself from ships and then march from Aquia Creek to Pope. But naturally, when some of Mac’s troops did fail to make it to Pope in time to meet Lee – and the Federals were routed – as usual the administration blamed its own strategic blundering on Mac – he had acted without haste in getting his men to Pope, they cried!

As an early-war figure, does it make sense to compare him to Grant or Sherman?

Not really. The war was a constantly evolving process. Both the ground rules for conducting warfare and the goals of the war itself underwent serious changes between Mac’s last battle, Antietam, in 1862 and the start of Grant’s Vicksburg campaign in 1863. But most of all, it’s impossible to get around the political reality that the Republican radicals had no reason to see Mac victorious and no reason not to see Grant and Sherman succeed.

In Roman times, once a general was in the field with his army, backing by the government was not critical. On the other hand, the American Civil War was an industrial based war. Once the government decided to cut off a general’s resources he was finished. The government always kept McClellan on a short leash, even before it cut him off completely following his saving of its hide at Antietam.

Thanks, James Ridgway, for providing an alternate view of this major Civil War figure.