The First Battle of Bull Run or the First Battle of Manassas as it is also called, resulted in thousands of lives lost; and as such it if referred to as first major land battle of the American Civil war. It was an incident of high importance where two untried armies met on the battlefield for the first time. It was a fierce and bloody battle that resulted in 1,312 captured or missing Union men, 460 Union men killed and 1124 Union men injured. 387 Confederate soldiers were killed, 13 were reported missing and 1582 soldiers were wounded in the First Battle of Bull Run.

What Led up to This Important Battle

Following the Battle of Sumter and the Battle of Philippi, there was significant pressure upon President Abraham Lincoln and Brig. Gen. Irvin McDowell to finish off the uprising from the South once and for all, in a firm and decisive manner. 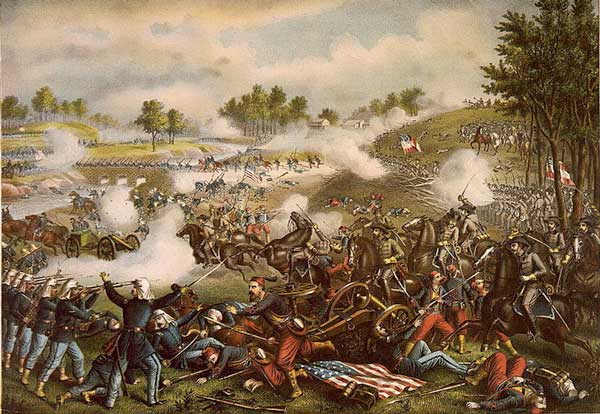 Brig. Gen. McDowell was well aware that his troops were inadequately trained and untested in actual battle; but the imperative from his president led him to devise a plan that involved marching upon Confederate forces guarding the vital railroad junction of Manassas in Virginia. Securing this key junction would also give the Union forces access to Richmond, the Confederate capital.

When 35,000 strong Union contingent set out from their positions around Washington, the Confederate Forces had already obtained intelligence about this. Even as the Union soldiers marched on and set up camp along a small stream called Bull Run, the Confederate forces were converging upon Manassas from the Shenandoah Valley. Most people seemed aware of the Union’s ill-guarded plans.

In spite of the forewarning to the Confederate forces, the Union was still able capitalize upon an initial advantage as they were able to push the former into a defensive position atop a hill. The Confederate forces rallied sometime during the afternoon after a lot of see-sawing. It was at this time that the Union troops first heard the sound of the Rebel Yell (a battle cry devised by the Confederates to intimidate the Union soldiers and thought to have its origins in the Native American or Scottish traditions).

Some of the significant losses sustained by the Union forces were Col James Cameron, the brother of Simon Cameron, Secretary of War. For the Confederates, this was the first time they lost a brigade commander; in the death of Col Francis S Bartow. This was a decisive victory for the Confederate forces which resulted in the apprehension among the Union Forces that there was now an opportunity for the Confederates to march upon Washington.