Dean B. Mahin is the author of One War at a Time: The International Dimensions of the American Civil War, a concise overview of the North’s diplomacy that breaks new ground.

You make the lonely argument that Lincoln was deeply involved in foreign policy. How could so many have missed seeing this?

Lincoln biographers, preoccupied with North-South issues and military matters, have paid minimal attention to foreign affairs. Nineteenth century U.S. presidents rarely talked in public about foreign affairs; their constitutional responsibilities for foreign affairs were discharged behind the scenes, mainly via verbal instructions to the secretary of state. Seward left no diary or memoir. The evidence of Lincoln’s role in foreign affairs was scattered through diplomatic correspondence, his letters and speeches, and the diaries, correspondence, and reminiscences of people who talked to him about various foreign policy issues. Until I spent three years searching for it, no one had tried to assemble and evaluate this evidence.

Do you expect a backlash against your findings?

Some Lincoln biographers will undoubtedly disagree with my conclusion that Lincoln paid much more attention to foreign affairs and played a much more important role in Union diplomacy than has been recognized by most of his biographers. I believe that the evidence I assembled supports my conclusions, although in some cases additional evidence would be very welcome. My view of British reactions to the Civil War, although it is based on extensive evidence and was well received by 60 avid CW buffs at the American Civil War Roundtable (UK) in London in April, may be disputed by revisionist scholars in Britain who challenge the “traditionalist” view that the upper classes were mostly sympathetic to the Confederacy while the working classes were mostly sympathetic to the Union.

Seward’s relationship with Lincoln drove Radicals crazy. How would you characterize their teamwork?

After a few initial weeks during which each was taking the measure of the other, they worked together very effectively. I found no evidence of disagreement between them on major goals or strategies. They convinced British and French leaders that they could not recognize Confederate independence or otherwise intervene in the American conflict without running a very big risk of war with the United States, during or after the civil war in America. I feel that the Lincoln-Seward foreign policy has been, until now, the most important untold success story of American diplomacy.

Given the extent of the fear of war on both sides of the Atlantic, do you think that there was ever a real chance of more than one war at a time? 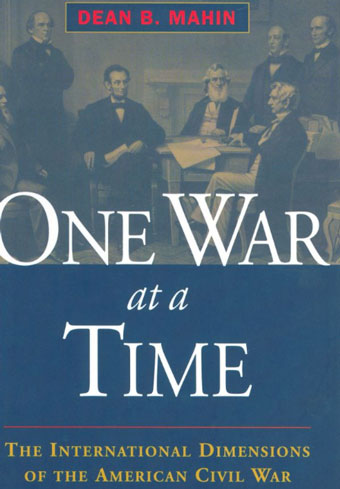 I agree with the comment of John M. Taylor, biographer of Seward, that “foreign intervention was a wild card that might have changed the outcome of the Civil War.” The French and British governments seriously considered diplomatic recognition of Confederate independence in l861 and 1862. Lincoln and Seward thought such recognition would lead to war with the recognizing government, during or after the Civil War, and I am inclined to agree. I do not agree, however, with those who say that the British would have recognized the Confederacy if Lee had won at Antietam. Most members of the British cabinet had realized before Antietam that recognition could lead to a war no one in Britain wanted. A victory by Lee at Antietam would have strengthened both the persistent British belief that the Confederacy could sustain its independence without outside help and the emerging view of most British leaders that they should await the end of the American war without risky European meddling. Soon thereafter the Emancipation Proclamation convinced British leaders that intervention would be viewed as support of slavery and would thus be unacceptable to the British public.

How “political” were Lincoln’s ambassadorial appointments?

The U.S. had no professional diplomats, so the present-day issue of political appointees vs. career men for major posts didn’t arise. All of the U.S. ministers had been active Republicans. Most of the important posts – notably London, Paris, Brussels, Vienna, Madrid, and Mexico City – were filled with men who were as well qualified as most U.S. diplomats of that era and abler, on the whole, than the envoys the Confederacy sent to Europe.

I was personally intrigued by the Administration’s proposal to send Scott to Mexico to deal with the crisis arising from the European invasion. Scott had a working relationship with Seward, dating back to Scott’s presidential campaign. The novelist Gore Vidal goes so far as to paint Scott as a Seward puppet. What do you make of this Mexican nomination?

I doubt that Lincoln or Seward actually wanted Scott to go to Mexico or thought he would be able and willing to go. The Scott nomination seems to have been a move by Lincoln and Seward to ensure that the Senate rejected proposals by the U.S. minister in Mexico, Thomas Corwin, for a loan to the Mexican government but left Lincoln free to continue his diplomatic and moral support of the embattled republican government in Mexico.

I was struck by the clarity of your summaries of every major foreign policy issue and event and I especially appreciated your directly quoting sources rather than summarizing them. What is the next major study needed in the field of CW diplomacy?

I hope “One War at a Time” will stimulate the further examination of some of the topics I explored. I suggest:

I am working on a study of the reactions of Europeans who were in America – as immigrants or visitors – to major CW issues including preservation of the Union, slavery, and emancipation.

What a sadly neglected topic that is, beyond the point of identifying ethnic group party affiliations. We look forward to something fresh on the subject. Thanks, Dean Mahin!