What led you to this project?

I came across the letters by accident while attending the College of the Holy Cross. One day, I went to the library’s rare book room, hoping that we held a few letters from an area Civil War soldier or perhaps a small diary. There, I found an extensive collection of letters written over three years by an Irish-born colonel who was well educated and extremely eloquent. I couldn’t believe my luck and as I read the letters, I knew I had to do something with them. I was also happy when I realized that Guiney led the Ninth Massachusetts, for I’ve always felt it was a brave Irish regiment neglected by history (for instance, the unit lost the most men of any Federal regiment on the field at Gaines’ Mill).

What attractive traits do you find in Guiney?

Foremost, his ability to be true to his political convictions in the face of opposition, not backing down from what he felt was right. Furthermore, he was a family man with a sense of honor and duty, religious faith and devotion to his adopted country. He started off in adversity as a young immigrant working in factories and ended up becoming a prominent Boston attorney, extraordinarily difficult for an Irishman of the time. In addition, he displayed true leadership skills, rising to command a volunteer regiment. I find his to be a very inspirational character. 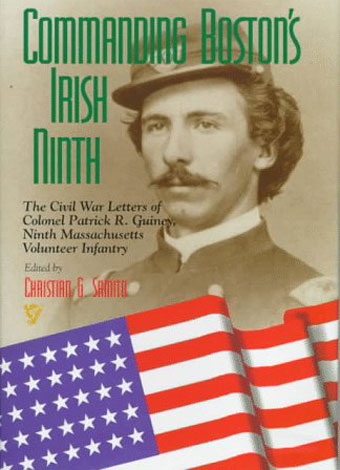 Works about Irish and German units in Union service always dwell at some length on politics. Were the Irish politically more developed or active than other servicemen?

I think it was paradoxical that so many Irish volunteered for service, considering their general political views. Overwhelmingly, the Irish were pro-Democratic and hostile to many of the tenets of the Republican party. Poor Irish, struggling to survive, were hostile to abolitionism and feared the economic threat of millions of freed blacks; the temperance movement threatened to deny many their one social outlet. Finally, the Republican Party was marked with nativism and general hostility toward Catholic immigrants. Nonetheless, many did sign up during the war and bled for the Union. A variety of motives caused this, from patriotism and a desire to show that the Irish were good citizens and loyal to the Union, to economic concerns and hostility toward the South for being tacitly supported by England.

Which higher-level units was Boston’s Irish 9th attached to?

The Ninth was in the Fifth Corps throughout the war. Its brigade was led by Charles Griffin and, when that general received promotion to divisional command, Jacob Sweitzer.

Fighting the duration of the war, how did Guiney view the conduct of the war in the East? Did he ascribe blame to Lincoln for the war’s duration?

Guiney didn’t ascribe blame to Lincoln for the war’s duration but to a lack of good generalship. He often criticized McClellan for being too slow and lacking the “genius” necessary to defeat the Confederates. During the period between Fredericksburg and Chancellorsville, Guiney felt that if the Republic died, it would be for the want of a general. One theme of Guiney’s letters was that vigorous action and constant pressing of the Confederates would end in Federal victory.

We are generally familiar with the persecution, if you want to call it that, of Democratic officers by Stanton’s War Office and Congress’s CCW. Did Guiney, for his part, suffer by being a Republican sympathizer among hard-core Democrats?

Very much so and it’s a testament to his political conviction that he stood firm in the face of such opposition. Several times, he faced cliques within the regiment and in Boston’s Irish community who opposed him and sought to have him replaced. For instance, upon his assuming command of the regiment, several officers signed a petition to the Massachusetts governor. They claimed Guiney was absent at the battle of Malvern Hill but neglected to inform the governor that Guiney was unable to move, confined to an ambulance with malaria at the time. Another incident came when Guiney punished two non-commissioned officers who were absent without leave. These attacks were mainly motivated by political differences and Guiney’s very outspoken support for Lincoln and abolition.

In his post-war political career, was Guiney a Democrat or Republican and of what stamp?

During the 1864 election, Guiney delivered several ardent speeches in support of Abraham Lincoln. Although still recuperating from the wound he received at the Wilderness, Guiney’s speeches were very well received and throngs of people turned out for his orations. He remained active in Boston politics and obtained a position as assistant district attorney, an impressive feat considering the nativism of the time. He eventually ran for Congress as nominee of the Workingman’s Party, but lost to the Republican candidate; the Workingman’s Party sought to address some of the problems facing laborers of the day. In 1868, Guiney turned out to support Republican Presidential candidate Ulysses S. Grant, but by 1876, he hoped Democrat Samuel J. Tilden would win the Presidential election. Guiney explained that he supported Tilden not because he thought he was better than Republican candidate Rutherford B. Hayes, but because he felt Tilden’s election would bring peace to a country still suffering the divisiveness of the Civil War through the Reconstruction. In the closing days of his life, Guiney considered himself “an independent with democratic proclivities.”

Thanks, Chris Samito. We hope your good luck in discovering and editing Civil War archives continues.