In 1862, Confederate president Jefferson Davis was forced to choose another general to lead the Army of Northern Virginia after Joseph E. Johnston was struck twice in the Battle of Seven Pines and unable to return to action. His choice was General Robert E. Lee, a decision which would save the Confederacy for three more years. General Lee’s performance against such great odds assured him a place in American history of mythical proportions. The fact that Lee left such a legacy is fascinating since it is rare that our country celebrates a man who has suffered defeat.

In ROBERT E. LEE’S CIVIL WAR (Adams Media Corporation), Bevin Alexander revisits the myth of Lee by re-examining the general’s military genius. Mr. Alexander discusses how the South had a chance of winning the war if its generals had taken advantage of strategic opportunities. Drawing on his first-hand study of warfare and military tactics, while a journalist on the frontlines in the Korean War, Mr. Alexander provides an in-depth analysis of the military strategies employed by the generals of both, North and South. 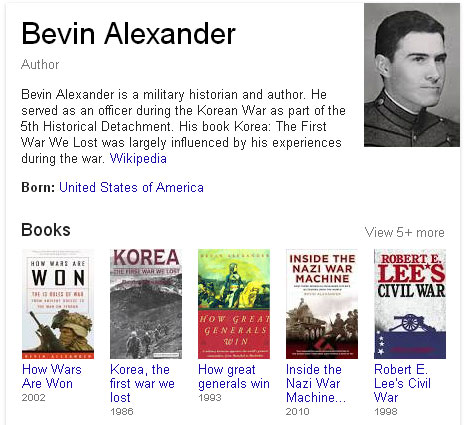 Why did you decide to write a book about the Civil War?

I actually was reluctant to write on this topic. It is very personal to so many Americans; many people had ancestors that participated in the Civil War, including myself. When I was writing a book on how generals operate, I became interested in the idea of leadership in the Civil War.

What do you think is the biggest myth surrounding the Civil War?

That the leadership in the Civil War was the best ever. In fact, both the North and South exhibited poor leadership. What was truly great, however, was the heroism and dedication of the soldiers and the generals.

Do you think the outcome of the war would have been different had Stonewall Jackson lived?

I do think the South had a chance when Stonewall Jackson was alive since he realized the futility in launching full-scale frontal attacks on the enemy’s strongest position and waiting for the North to grow tired of the war. Jackson realized that the Confederates would have to destroy at least one Federal army in order to sink Northern morale and bring about Southern independence. Lee finally did adopt Jackson’s plan for launching a massive strike on the enemy flank at Chancellorsville. Then, of course, Lee reverted to his old ways once Jackson died.

If Stonewall Jackson possessed the greatest military genius, why was he not in charge instead of Lee?

Robert E. Lee was from the aristocracy and this was the social class from which generals were chosen. Also, Jefferson Davis appointed Lee since Lee’s thoughts on how the war should be fought were similar to his own. Davis did not want to fight an aggressive war, so it follows that he would not appoint a general like Jackson.