Battle of Wilson’s Creek or the Battle of Oak hills was the second major civil war battle. This war took place within two weeks of the first major battle in the west of Mississippi River. This battle was fought on August 10, 1861 near Springfield, Missouri between Union Forces and the Missouri State guard.

The leaders involved in the battle

The commanding officers fighting for this battle had some prior experience of war field. General Sterling Price was part of Missouri volunteers during the Mexican war and Brigadier General Nathaniel Lyon was serving in the regular Mexican army and also fought against the Native Americans. General Ben McCulloch was the most experienced of all as he had the experience of three wars behind him and Colonel Franz Sigel had served in the German army as a soldier. During the war when General Nathaniel Lyon died the command was passed over to Major Samuel Sturgis.

Army of the West under Brigadier General Nathaniel Lyon was stationed at Springfield, Missouri when Brig. Gen. Ben McCulloch was approaching towards them with his Confederate Troops. It was on the 9th of August when both the sides planned attack against each other and the execution of the plan started at 5 am on 10th of August. 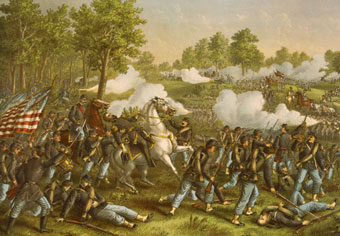 Brigadier General Nathaniel Lyon and Col. Franz Sigel attacked the Confederates on the Wilson’s creek which was located almost 12 miles south west of Springfield. Brigadier General Nathaniel Lyon’s surprise attack early in the morning caught them unaware and they had to move back from the hill without putting up much resistance. But it did not take much time to get hold of their senses and plan a fight back. The Union Forces were attacked three times consecutively on the very same day but without any success to break through the Union line.

During the battle, Brigadier General Nathaniel Lyon was killed and Major Samuel Sturgis was asked to take over the charge of the troops. While this was happening on one side the Sigel’s column was routed on the other side by the Confederates at South of Skegg’s branch. By the time the third attack ended it was almost 11 am and the Confederates withdrew. Even the men of Sturgis’s army were tired and exhausted and the ammunition too was on the lower side; so they thought returning to Springfield would be the best thing to do. The Confederates were not able to make any mark in the battle because they were ill-equipped and not organized enough.

But as Sturgis retreated back to Springfield it was seen more as a victory for the Confederates and this kept the hope afloat for them. In the late October there was a rump convention summoned by Governor Claiborne Fox Jackson to pass an ordinance of secession in Neosho. The most significant battle in Missouri handed over the control of southwestern Missouri in the hands of the Confederates.

The Confederates won the battle but there was a loss of 2,330 lives altogether from both the troops.