The Battle of Shiloh, which took place for two days, from April 6 to April 7, 1862, is also known as the Battle of Pittsburg Landing. With one of the highest number of casualties, this is also recognized as one of the important engagements of the American Civil War. In the Southwestern Tennessee, the Confederates launched a surprise attack on the Federals under the leadership of two generals, Albert Sidney Johnston and P. G. T. Beauregard, out of which Jonhston was killed in the action.

The Union forces were lead by General Ulysses S. Grant. Apart from him, General Don Carlos Buell was part of the Union troops. Generals Albert Sidney Johnston and Pierre G. T. Beauregard were leading the Confederate side. The military units that were part of the Battle of Shiloh were the Army of Tennessee, Army of Ohio of the Union and Army of Mississippi of the Confederates. Going by the unit strength, the Confederates were the weaker side with only 44,699 soldiers whereas the Union had a total of 66812 soldiers. 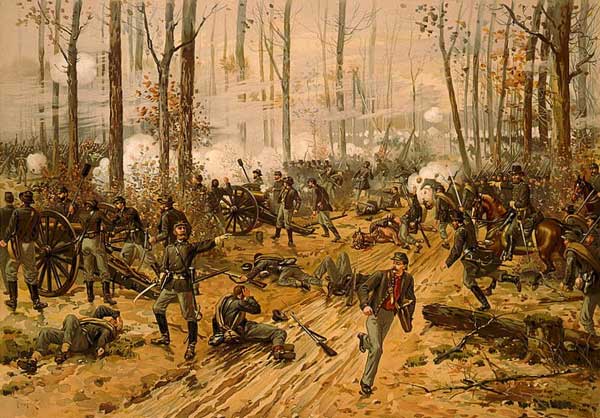 The dawn of April 6, witnessed a surprise attack in the Shiloh church region by the Confederates under the leadership of General Albert Sydney Johnston. General Ulysses S. Grant was taken aback by this attack. A strong fight was taking place on the Shiloh Hill between the two troops and Confederates were the one who gained the ground initially. Federals gave way to the Confederates reluctantly, but a series of fight broke out in a succession of defensive point at Shiloh Church, Peach Orchard, Water Oaks Pond and Hornet’s Nest.

When the battle started, the Confederates were in a good shape, but as the day progressed they also started losing it in the middle and at the end of day, they were completely disorganized just like the Federals. There was no coordination as brigades, corps and divisions entwined. The whole command of General Ulysses S. Grant was completely overwhelmed by the Confederates as they were too overpowering and the Federals were unprepared for the attack.

But, still the Federals held their ground and by the noon time, they were able to gain some place. The first attack by the Federals left General Johnston wounded and was soon substituted by P. G. T. Beauregard. The fighting not only continued through the day, but even at night the combat was not over. All this while the Federals held the ground, no matter what, but the next day the huge army of the Federals outnumbered the Confederates’ small troop.

There was a time in the battle when the Confederates threatened to trap the Union forces against the river of Tennessee. But, the main problem was that there were several troops on both the sides that were inexperienced in the battle. By the night time, the Union soldiers drove the Confederates back, recapturing the Hornet’s nest, Bloody Pond and Peach Orchard.

The Confederates retreated back, thus giving Grant a major victory over the Confederates. The casualties from both sides were quite high; a total of 23,000 casualties were reported from the battlefield, making it one of the bloodiest battles in the history of America.