The Battle of Glorieta Pass was fought in the northern territory of New Mexico between March 26 and 28, 1862; March 26 saw a minor skirmish between the Union and Confederate forces whereas the main battle was fought on March 28.

Jefferson Davis, the Confederate President, approved the plan of Brigadier General Henry Hopkins Sibley to be in command of the whole New Mexico by raising a force in the month of July, 1861. The main objective behind this plan was to sieze the Union’s military supplies. Another idea was to recruit the Utah Mormons, New Mexicans as well as the miners of Colorado to the Confederates’ cause. This was done keeping in mind the mineral wealth that was prevalent in California and Colorado, which could be used to fund them. Even the Californian Ports would provide them with an interference free international trade facility. 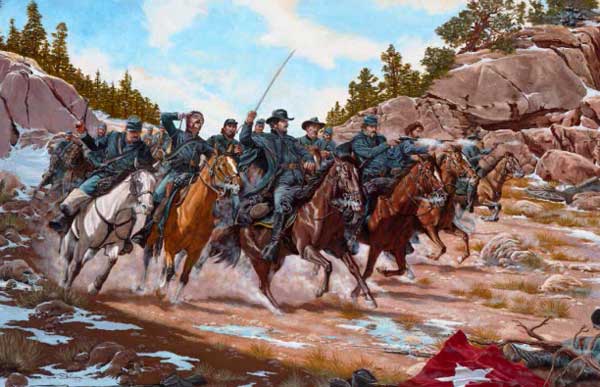 The Glorieta Pass was considered as a strategic position because of its location. This place is located at the southeast of Santa Fe, southern tip of Sangre de Cristo Mountains and Santa Fe Trail. In 1862, during March, a force of 200 – 300 Texan Confederates under the leadership of Major Charles L. Pyron set up their camp at Johnson’s Ranch that is present at the end of the pass on one side. From the Union side, 400 soldiers trod towards the Pass under the leadership of Major John M. Chivington. Finally, they attacked the Confederates on March 26 in the morning.

A few hours into the noon, the troop led by Chivington was successful in capturing some of the advance troops of the rebels. They soon got to know that the main force was just behind the advance troops and they attacked them, but the strong artillery forced the Union to move back. It didn’t put him back; instead he regrouped and split it up in two forces, so that they can attack the rebels from both the sides of the pass. This plan worked and the Confederates were caught in the crossfire, which lead them to retire soon.

Within a mile from the location Pyron and his men retired only to come up with a defensive line before Chivington can arrive with his army. This time too, the Confederates were not able to put up a stronghold against the Federals, forcing the rebels to flee allowing the Union cavalry to capture the rear guard.

Final result of the battle

Both Scurry and Slough decided to attack early on the 28th of March. Scurry arrived with his troop of 1,100 and Slough with his troop of 900 soldiers. When Scurry saw the Union forces approaching, he soon crafted a battleline and even though Slough attacked them, Confederates held the ground and kept on attacking the Union. The fight ended when Slough retired to Pigeon’s ranch first and then to the Kozlowski’s Ranch. The Union destroyed the animals and supplies of Scurry, which made him retreat too. The Union was finally successful in stopping the incursions of Confederates.