This battle of Forts Jackson and St. Philip was an engagement for the control over New Orleans. Battle of Forts Jackson and St. Philips was fought between April 18 and April 28 in the year 1862. There were two forts of the Confederates on the Mississippi river and they were attacked by the Union. The Union forces planned to cut off the entrance to the rebel ships by capturing the city of New Orleans and for that they had to enter the Mississippi river’s mouth. Though the Union soldiers were able to open their way, they were stuck with two forts, St. Philip and Jackson, that were almost seventy miles from New Orleans.

Commanders involved in the battle

Flag Officer David G. Farragut was leading the Union, whereas, on behalf of the Confederates, Brigadier General John K. Duncan, Cdr. John K. Mitchell and Captain John A. Stephenson were leading the troops.

Encounter of the Union and the Confederates

The Confederates were prepared to defend their territory and for that they had already placed two ironclad ships along with several other ships in the river. This was done to obstruct the smooth sailing of the Union ships. They also arranged their armaments to stop the Union from taking over. The operation was based on the ship; so Farragut assembled as many as 24 vessels along with 19 field gun schooners of David D. Porter near the Head of Passes. All this was done by the 8th of April. 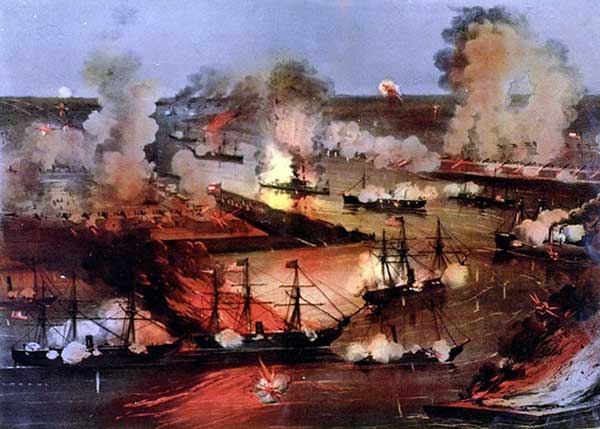 But the real action started on 16th and continued for 7 days. The Union kept on bombarding Fort Jackson with its mortar schooners, but without any positive outcome. The Confederates continued firing without any break. At last, on the night of April 22nd, the gunboats of Farragut were able to open a way for themselves through all the hindrance that was set up by the Confederates.

The dawn of April 24th saw a silver lining as the ships of Flag Officer Farragut sailed through to reach the north. When the Union forces were passing towards the fort, the Confederates tried every possible way to stop them, but weren’t successful. Most numbers of forces were able to dodge the Confederates’ attempt and successfully found a way around the forts. They kept moving on to New Orleans and there Farragut acknowledged the surrender of the largest Confederate city of that time.

In order to make sure that the Confederates were left with no other choice than surrendering to the Union, the latter had cut off the fort’s communication and surrounded it from all sides. After that, the inevitable happened and the garrisons of Fort Jackson and Fort St. Philip were prompted to surrender on the 28th of April.

Union won the Battle of Forts Jackson and St. Philips, but there were casualties of 1,011 in total. As it was a pivotal position, when these two forts were captured, Natchez and Baton Rouge also complied.