In the 4 years that saw bloody and tortuous course of the American Civil War, the Battle of Fort Sumter has special significance since it was in a sense the actual beginning of the Civil War. It was the bombardment of Fort Sumter in South Carolina’s Charleston Harbor from on April 12 to April 14, 1861 that saw the escalation of the conflict between the Confederate States and the North.

Significance of the Fort Sumter battle

Some historians refer to this battle as the ‘first salvo’ of the bloodiest war in US history. Although there were no casualties of this skirmish, it still was of vital importance. At the time, South Carolina considered itself a sovereign state, after its secession from the union. 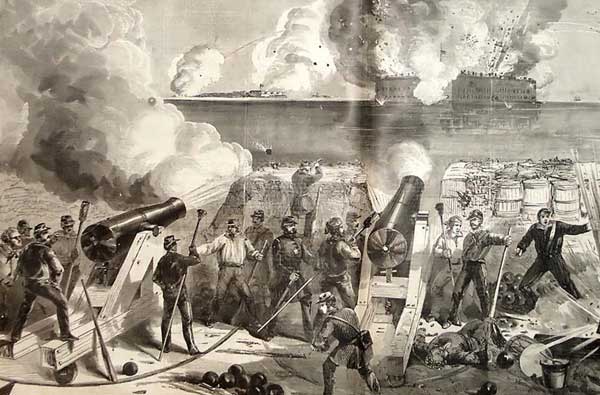 However Maj. Robert Anderson and 85 soldiers under his command were still present in North Carolina. They had been situated at Fort Moultrie near the entrance to Charleston Harbor, but fearing for their safety, the Major moved his forces to Fort Sumter. Both these forts were situated at opposite sides of the entrance to the Harbor. South Carolina called upon the US Army to remove their forces from Charleston Harbor as the Major and his men were perceived as interlopers in the area.

The Battle of Sumter

For a while it was a siege like situation, before Brig. Gen. P.G.T. Beauregard from the side of the Confederate States, via his aides, demanded that Maj. Anderson and his troops vacate the fort. This was on 11 April. The fort itself was in a secure position and bomb secure. As such it would have been able to protect itself from intruders for a significant length of time.

However because of the siege like situation that preceded the battle, rations and food supplies were running out for Major Anderson and his men. When the Major still refused to surrender, the Confederate Forces commenced bombardment of the fort on the following day.

Because of the foregoing siege, the Confederate forces had had the time and the opportunities to shore up their artillery and their men. Also the Union men did not have the equipment that would permit them to out-gun their attackers.

According to some records, the battle lasted for 34 hours. At the end of this battle Maj. Anderson and his men had to surrender and evacuate the fort. It is a miracle that a gun battle that lasted so long resulted in no deaths. The Battle of Sumter is remarkable for this reason and hugely significant as the first battle of the American Civil War.