Historians also refer to the Battle of Ball’s Bluff as the Battle of Leesburg or the Battle of Harrison’s Island. This battle was a part of Gen McClellan’s strategy in Northern Virginia aimed at eventually taking over the Confederate capital of Richmond. It took place at Loudoun County in Virginia on October 21, 1861, three months after the terrible setback suffered by the Union forces during the First Battle of Bull Run.

Significance of the Battle

While the Battle of Ball’s Bluff resulted in relatively fewer lives lost, when compared with other battles of the American Civil War, it was a very significant victory for the Confederate forces and Union defeat that cast a shadow on the operations of the union for years to come. The battle also raised issues regarding the chain of command structure and about other power issues. It had repercussions at the highest levels in Washington as well since a US Senator; Col Edward D Baker lost his life in the battle (the only US senator to have been killed in battle). 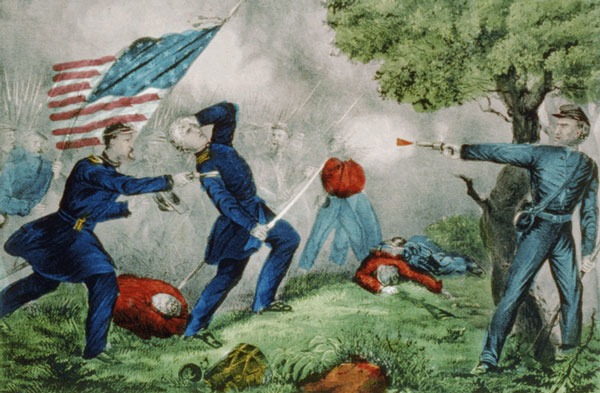 This offensive launched by the Union was actually a series of missteps and poorly calculated maneuvers. At first there was the mistaken impression formed by a scouting party led by led by Captain Chase Phillbrick about a Confederate camp that was actually a line of trees. Instead of a nighttime raid upon what they believe to be a campsite, the small company of Union men ended up waiting for reinforcements in their bid to eventually march upon Leesburg.

Before sufficient reinforcements could reach the Union forces, there was a sharp skirmish between them and one company of the 17th Mississippi Infantry. The process of Union men crossing over the Potomac was hindered and rendered painfully slow by their having only 3 boats for their ferrying operations. Meanwhile the numbers of Confederate soldiers grew steadily in number.

As the fighting proceeded in real earnest, the Union soldiers began to be driven back down the steep slope of Ball’s Bluff. At the same time, boats trying to cross back to Harrison Island were swamped and eventually capsized. Many men drowning contributed to the death toll.

After this battle which followed upon the hells of defeats at Bull Run and Wilson’s Creek, there were murmurs about a conspiracy to betray the Union. The direct result of this battle was the formation of Congressional Joint Committee on the Conduct of the War, which was to remain a bugbear for the Union in times to come.